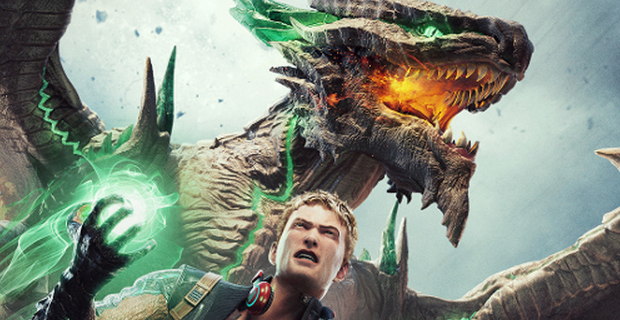 Well, not a week ago I was musing, quietly, in my little corner of the Internet that if any company had an issue this coming year in the console space, it would be Microsoft.

And Sweet Merciful Mantorok Singing Adele Songs, we’re barely into 2017 and the gaming world is ablaze with concerns and queries following the sad cancellation of Scalebound, one of a mere handful of XBox One exclusive games we know about – and one, by all accounts, was not far from completion either. Cue a deluge of people grasping at straws, or trying to work out if this will hurt the XBox One and, more importantly, the XBox Scorpio.

What many of them fail to articulate, in my view, is that Microsoft has had a gaming problem for years. People just haven’t been able to hit the nail on the head, so to speak, but I’ve known for a while now exactly the problem here and it’s surprisingly simple to pin down; Microsoft has no strong root in the gaming scene, and that is because in the process of wanting it all, it has ended up with nothing.

Allow me to elucidate – back in the 90’s, Microsoft was the major player in the PC Gaming scene. That was largely because it was the biggest company and, since the vast majority of games ran on Windows, it was easily the first port of call. By the turn of the 2000’s, Microsoft had the PC Gaming market largely sewn up and dominated it, by both helping to publish, distribute and even make its own games at times. This was their turf, and no-one could deny it.

Thing is, Microsoft had seen the rise of video games as a primary area for profits, and PC Gaming at the time, whilst important, was not the largest scene for video games. The market was largely focused on home consoles; at the time, PC Gaming required lots of driver updates, huge install times and yes, the odd patch before Broadband and Fibre-Optic was a thing. We liked our PC games; but they often took time, loading times were an issue in places and the market had largely moved towards home consoles purely on an ease-of-use basis. You put a game in the machine, you turned it on, the game loaded, you kicked back and played it. No driver conflicts, no needing to update frameworks, no lengthy install times – just pick up and play. Microsoft wanted in on this scene, and their first outings so to speak were not in the XBox, but the Sega Dreamcast – a console which ran on a modified Windows CE framework.

Most of us know why this was a bad idea from the outset; Sega, as a hardware company, were suffering immensely long before the Dreamcast hit the market. It had pulled out of the handheld market, where it was one of the few companies who put up a fight against Nintendo. Several attempts to release modifiers for their 16-bit hardware all lost money; the Sega CD and the Sega 32X were hugely expensive endeavours that sold like bottled cat farts. And the Sega Saturn was pulled from shelves early, because Sega could no longer justify or afford to keep producing the hardware. Couple this with the slowly decaying Arcade Market, in which it had lost the lead in terms of hardware to a multitude of other companies, and what you had was a company which was already facing disaster and needed the Dreamcast to sell well. And it did – 12 million in 18 months is hardly anything to sneeze at, but to pay off creditors and debts, Sega likely needed double that volume. So Sega collapsed in on itself, and Microsoft was left without a foothold in the console market.

Enter the XBox. Microsoft pushed the XBox, which did rather well for itself considering its late arrival. It was even at the time an expensive endeavour – but it gave Microsoft at least a presence in the console space, and having bought a bunch of exclusives – like Oddworld: Munch’s Odyssey – things began in earnest. After all, if you can’t rely on someone else to get your foot in the door, you gotta get your own foot in the door.

The XBox 360 was perhaps Microsoft’s main success in the market, but over the years, we began to hear odd things. Microsoft was spending lavishly getting games; paying for timed exclusivity more often than not, and then reacting quickly to the explosion of interest in motion controls with the Kinect – again, another lavish expense on their part. Talk was that even with the subscriptions on XBox Live, Microsoft EAD was spending more establishing themselves in the console space than they were making. Which many might argue wasn’t a bad idea; after all, Microsoft is a huge corporation and makes outrageous sums of money, so what is a few million or a few tens of millions of dollars here and there when your overall company is raking in tens of billions of dollars annually?

However, Microsoft took its eye off the PC Gaming ball. Valve was beginning to establish Steam not as a DRM measure, which it had originally been intended as, but as a full-fledged storefront in its own right. Valve was a huge name in video games even then; Half Life was massively successful for the company and was getting console ports. It had a lot of consumer goodwill, which it eventually capitalised on when it started selling games through its front-end. Over the years, Steam would grow into the de facto place for PC Gaming, changing the face of the market largely forever with automated updates, combined patches and a sensible interface. Microsoft’s distractions with the XBox 360 allowed a rival company to come in and supplant itself wholesale inside its own borders, and by the time Microsoft largely realised this chances are it was far too late to do anything about it.

The XBox One launch fiasco showed how tenuous Microsoft’s grasp on the console market was, however. Ambition misplaced, concepts that made no sense and an outrageous sense of self-entitlement after many years of success in the home console space had left the company assuming, wrongly, they could get away with anything. Ask Sony how that went down with the PlayStation 3 launch. It didn’t, and Microsoft endured months of U-Turns, bad press and ridicule across the Internet. Far from selling the XBox One, many simply turned away. Others bought a PlayStation 4 out of spite. And Microsoft have struggled to reestablish itself again.

Microsoft tried to dabble in other markets for gaming too. Windows Phone, for example, and its purchase of Nokia, and tablets in the form of Windows Surface, which took years to establish and are still not nearly as popular as rival products. Microsoft arrived too late to these markets to make any dent, and by this point many of us began to wonder if Microsoft themselves were now grasping at straws.

Nowhere is this more clear now in the Windows 10 crossover ideal.

XBox One exclusive games have been getting PC ports. Initially, Microsoft used these games in order to push its Windows 10 Store, an attempt to put up a fight against Valve, a fight which was futile and one it was only ever going to lose – and seeing many of these games are now available through Steam, it’s fair to say that Microsoft lost. Here’s the problem – if I can buy many of these exclusively Microsoft games on my PC – which is superior to the XBox One hardware – why would I buy an XBox One? What logical reason is there for me to invest in their home console when I can play the same games on my PC?

The same issue is cropping up with the XBox Scorpio. Games will still be coming to the PC; and they’ll also, if reports are to be believed, have to have an XBox One compatible version. So there’s no sane reason to buy a Scorpio unless you are vested into 4K gaming. And most people who currently are… are PC Gamers. Who will have access to those games on Windows 10 anyway.

Was it ego and hubris, or did Microsoft genuinely believe it could bring something to the party? I’m not sure, but a string of bad decisions, gross mismanagement, huge expenditure and ignoring growing markets have left Microsoft’s gaming segment in a perilous situation. Most of us have stopped caring, and with no real good reason to buy a Microsoft home console – why would we, when most of us gamer types have computers capable of running these games? – it’s time Phil Spencer asked a serious question; could the XBox brand survive purely as a gaming division, sans hardware? After all, as much as the Scorpio fascinates me, I can’t help but wonder if pushing a 4K console is an extremely niche market in a home console market already in a period of decline.

Microsoft was right; video games were a growing market. When it comes to video games themselves – Microsoft is, usually, quite good at this. Sure, they have down moments, but generally speaking they’ve been good. I applaud the huge risk they took on getting Killer Instinct back up and running with Nintendo’s blessing, and that game is actually really very good. Superb, even.

It’s why the cancellation of Scalebound actually surprised me. This was an ambitious little project that had taken up four years of PlatinumGames’ time, and Microsoft in my view has been pretty good at letting these things play out. As one of its bigger-banner game releases this year, its loss only highlights how little there is this year for the console – and how much of it can, as I said, be played on a PC. So it’s running out of games, and it is running out of hardware excuses – if not out of excuses completely. Microsoft tried to fight on three separate fronts. Hell, Sony and Nintendo fight on two fronts and even they have traditionally had to concede one or the other – Sony usually taking the home console whilst Nintendo continues its dominion over the handheld space. How Microsoft thought it could win in three distinctly different markets is anyone’s guess.

In summation, I think Microsoft got greedy. It wanted all the games and wanted a foothold in every gaming market. But, as another moralistic tale, by trying to have everything – one can see that Microsoft is ending up with remarkably little to show for its sixteen (eighteen counting the Dreamcast) years in the home console space.

But whatever happens next, Microsoft gave me one of my top ten gaming moments of all time… hearing Jonathan Ross getting eaten alive by Balvarines in Fable 3.

What can I say? Was it worth £300 of hardware and a £50 game purchase (a half-arsed game at that) to experience that?

Thank you Microsoft. Now, pick a goddamned lane and stick with it, grandpa!

Pokémon Switch – It Can Wait Some More

A Digital Future Must Get Cheaper!