Look, I know I’m going to piss off a lot of Sony fans here. That’s fine. I’ve bought all their consoles, and some of their failures – they exist and we’ll get to that raw nugget of fun soon enough. Sony has been a good company for the last twenty-one years in the video game landscape and it is not unreasonable to suggest they’re as important to the market as Nintendo is. Without the PlayStation, chances are the industry as we know it wouldn’t exist (and you can thank Nintendo for pushing Sony into this arena. Say thank you to the nice Nintendo people, Sony fans!).

But I’m not going to sugar-coat it. Putting PS4 games on PS Now!, and making PS Now! available on PC, is going to create competition with itself.

My guess is to start with you’ll see things like Bloodborne thrown up on PS Now – recent enough that there’s still interest, but old enough that anticipating additional tens of thousands of sales is probably an unreasonable assumption. That’s fine and all, and I get that, but the problem here is that Sony doesn’t have a good track record when it comes to knee-jerk reactions, and with Microsoft pushing more recent XBox One games on PC – Sony could find itself in an arms race on the PC Platform, against Microsoft, and lose sight of the home console scene.

“Knee-jerk reactions? Lol, you Nintendo troll!” is what I think I hear in the background.

And yes, Sony has a long, LONG history of this. Remember the original PlayStation Controller? How about I show it to you. 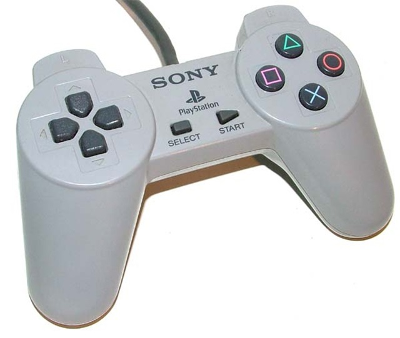 This was the default PlayStation controller for almost two years – Nintendo was the first to get both an analog stick and rumble technology to the market, and Sony spent eighteen months wrapping that into what we call the DualShock today. And whilst it was a great controller – Sony spent a lot of money on expediting research and development of this controller (reports suggest $100 million), and then Sony ended up in a legal battle over its rumble with Immersion. A suit it lost, and had to pay Immersion more than $150 million, not including six years of legal fees trying to worm its way out of the suit. Sony wanted what Nintendo had – and it cost them.

Sony also wanted what Sega had, and as the Dreamcast launched with its VMU, Sony launched the PocketStation. It was only released in Japan, and was in fact better than the VMU in a lot of ways, but both devices were fairly rudimentary and third-parties were able to make copies of the device even in Japan, with some fakes even fooling retailers (and later devices even improved on the base unit!). It was a bit of a disaster.

And we see this with the PSP and PS Vita – twice Sony tried to take on Nintendo in the handheld market and twice have lost by a significant margin of unit sales. Sony wanted an online network like XBox Live, and in 2011, Sony ended up paying $171 million rebuilding its own network after – at the time – the largest data security breach recorded, and this didn’t include compensation or fines in various countries (the UK imposed a £250,000 fine for lack of adequate security procedures).

We saw this with the PS Move – wanting to copy the Wii Remote. And we’re seeing it now with PSVR and the PS4 ‘Pro’, both launched after knowledge of rival platforms, which so far are both failing to set the world on fire (PSVR was expected to sell 4 million units in its first fiscal term before its launch, then in December that was revised down to two million and now they expect that figure to be one million by the end of March). And the less we say about the amount of money Sony blew on Blu-ray, the better.

Sony has a problem guys. You know it. I know it. Protozoic algae from the constellation of Ophiuchus know it. Sony wants all the things, and rarely stops to consider the implications of actually getting them.

(Hint; it costs lots of money!)

Indeed, PS Now as a video game streaming service is already stepping into the void left by the now-defunct OnLive – parts of which Sony bought with this in mind alongside Gaikai. This has been done and OnLive was an expensive freaking service to run. Sony may be better placed with better content, but third-party software isn’t going to fly here – Sony is going to need to drive support with its own exclusive software, and sorry to point this out, Sony has comparatively less of this now than they used to. Sony shut down numerous studios and canned numerous games, consigning many brands to the scrapheap, during the troubled period of 2005-2014, as it sought to stymie the loss of money (at no point considering that chasing the competition with no hint of success might be causing the problem but now I’m being pedantic…).

When I say Sony runs the risk of going too far with PS Now!, I’m speaking from decades of being there as a consumer. And this is a market which has Microsoft, CD Projekt (GOG.com) and I dunno, Valve’s STEAM SERVICE! Oh, and let us not forget the wart that is EA’s Origin service. Ahem. Sony is launching into a market which is already dominated by one company, arguably two companies in fact, and is going to need to deliver something more than some old PS games to attract widespread adoption. If it goes too far… well, it runs the risk of cannibalising its own home console market, a possibility even Nintendo couldn’t have foreseen but must be giving ol’ Reggie Fils-Aime the best dreams he’s had in years…

I don’t say this as a Sony hater – I say this as a consumer who loves video games. Sony… stop. Please. Please, just stop for a moment. Think about this.

I like the idea of PS Now! as a service – I always have, despite the opening week being practically unusable. I like the idea of a Netflix For Games. We all do, and it could and should potentially be great. OnLive, despite its costs and failings, was a damned fine system and I used it thanks to BT’s investment in it (they gave away annual subscriptions with broadband contracts!). But it’s what PS Plus should be. This should be what they offer instead of PS Plus. Sony could up the monthly sub to £12.99 – people will complain, but with a lot of that content, the complaints will evaporate fairly quickly.

PS Plus was great whilst it lasted, but with so few big-name games hitting the thing, it has been dying for a while.

Sony can, and should, be looking to make something from its purchases of Gaikai and OnLive. It’s clearly a future Sony wants to invest in, and perhaps it does shows a lack of confidence in their own hardware – it has not been an easy road for the PlayStation brand, and PSVR and the PS4 ‘Pro’ probably will never recover the research and development costs if you consider the initial figures (the ‘Pro’ sales aren’t being reported – but with about 5 million PS4 sales tallied at last count since its launch, even if you’re generous and say 10% of those were Pro consoles, that’s 500,000 units in a market of 54 million – less than one percent of its overall figures).

Think about this; Sony has four major pieces of hardware in the air right now – the PS4, the PS4 ‘Pro’, the PS Vita and PSVR. Nintendo showed keeping two going was enough of a challenge in the current market climate. Sony, to me, is trying to show off – but with overall sales of all four hardware components less than the overall sales of the Wii U and 3DS combined, it’s like waiting for the chainsaws being juggled to finally drop on the poor jugglers head. You know you shouldn’t be waiting around for it, you shouldn’t even be thinking it will happen, but you still have the emergency services number already dialled into your mobile phone. You know, just in case…

My feeling is Sony needs to pick a lane and go for it. If it feels PS Now! is the future, then they should go all-in. Caution to the wind and all that nonsense. I’d respect that. I’d be sad to see PlayStation hardware start dying off, but I’d respect the statement that Sony feels digital games streaming is the future. If it let us buy/rent more recent releases, keeping things sweet… well, the PSP Go! looms large there but retailers already sell digital codes now for games, something that they’d have balked at (and actually did balk at) back in 2009.

But I don’t know what Sony thinks the future holds. It isn’t saying much, and not that loudly. It just seems confused right now. Perhaps this is just a consequence of Gen-8, which hasn’t been a great console generation. It’s not as if Microsoft or Nintendo were shouting much either. But at least now we’ve got the Nintendo Switch – a piece of hardware which, despite its issues (and there are many), at least tells me where Nintendo is headed. Where it thinks technology is headed. Is it right? Is it wrong? I don’t know. But it’s something.

I’d just prefer more clarity… and for Sony to maybe, you know, stop chasing the competition and nail down one thing for once. I believe that this was why the PS2 was a huge success. It was a new console, but also a DVD Player. And it cost no more than £50 more than a decent DVD Player of the time. Boom. We got it. DVD Player, DVD Gaming. Sony kept the PS2 painfully – almost embarrassingly – simple. We understood that.

Sony’s now like, “Buy a PS4! And PSVR! And look at the Vita, we’re still supporting it! And PS Now! And we’re making sure games get PS4 Pro support too! Buy a PS4! Did we mention VR? And the Vita? And our Now service?…”

Uhh… think I’ll just stick to playing Breath of the Wild – oh look, a game amalgamation that makes me look like a hypocrite!

Mikami for RE8? (A concerned mumble)