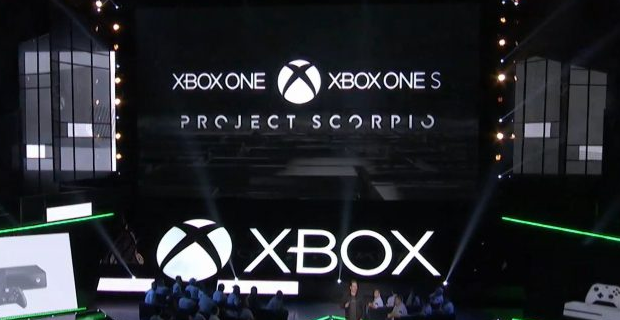 Forget the hardware for a second. Forget the XBox One sales figures and the disastrous PR that preceded its launch. Forget the concept of 4K Gaming and let’s not even touch on the potential price point because before we even begin to get down on our knees and take a closer look at all the aforementioned things, we need to address the gigantic elephant squatting in a pile of its own faeces in the corner of the room – ready? You braced for this? Good.

Seriously, I shouldn’t even have to point this out. We live in a post-Switch Reveal world. Rather than talk at length about the hardware and its power and performance and all those teraflops, Nintendo bided their time, waited until they got the kinks worked out in their system and then dropped –that– reveal on us. Heck, Nintendo even delayed the reveal by a month, for the sole reason that they wanted to make damned sure the few seconds worth of Super Mario Odyssey footage was running at sixty frames a second. Not only that, we saw many games during the reveal – including Skyrim (and yes, it’s a five year old game but go ahead and try buying a tablet that’ll run and play this game properly that isn’t the Nintendo Switch!). And when we saw the hardware – it looked good and made sense, with the satisfying “click” soundbite demonstrating the switch between home and portable console.

The Scorpio, so far, is words. Numbers on paper. Theoreticals, and if Eurogamer are to be believed, so far the only footage anyone has seen running at 4K on the thing is a Forza game, and I hate to be the one to break the bad news to people but racing games aren’t that technically demanding on the hardware until you start adding real-time weather effects. Sorry about that. Forza running at 60fps and 4K means precisely Jack and Sweet F.A. to anyone at this point – great, you convinced a few gullible press n00bs that running Forza in 4K was hard. Good job Microsoft!

We, the gamers, are going to be the harder audience to convince.

And coming barely a couple months after the 2017 lineup for the XBox One became positively anaemic thanks to the cancellation of Scalebound, what’s missing from Microsoft isn’t hardware grunt – I mean, come on people. Look at Breath of the Wild, look me in the eye and tell me that’s not a pretty game. Hardware isn’t the issue. Developers make the best use of whatever they’ve got to hand, after all how do you explain the Wii U’s library of things like Bayonetta 2 and Xenoblade Chronicles X? You can do good things, great things even, with ageing hardware.

The press claims that the XBox Scorpio is designed to get “major third-party support”.

The thing is – Microsoft can’t really guarantee third-party support unless it continues to pay for exclusivity deals (which Phil Spencer has already ruled out I believe, unless Microsoft has made another U-Turn), and as Dead Rising 3 and 4 have demonstrated, buying exclusivity doesn’t make the games better. More than that, third parties will go predominantly where the wider market is – which means if the Scorpio ends up a high-end niche machine, its overall support will be significantly lower than that of the PlayStation 4 and/or Nintendo Switch. Sure, exclusivity payments are nice and all but you still want those games to sell in volume. If they can’t – what’s the point?

And again – those are words. Great, you’re talking to major developers. What will come of that? Who knows!

I’ve said it before and I’ll say it again for those who don’t frequent this blog often – games sell hardware. Satoru Iwata understood this better than most; great, you got a hardware concept. Excellent, good for you, now what can that do with games? After all, that’s largely why the Wii U bombed – even Nintendo, having dreamed up the Gamepad concept, couldn’t figure out a killer hook for the machine. Sure, it had games – great games, but nothing that wouldn’t have been just as doable on a normal controller setup. It’s why the Switch finally dropped the two-screen format; after more than a decade, the only game to use the format with any real success was Pokémon, and it’s clear as day that even then a normal menu system wouldn’t have been much different in the long run.

Running games at 4K hinges on one key factor; that we only desire graphical fidelity above everything else.

We know, however, this isn’t the case for most gamers. The Order: 1886 was a mess, DriveClub was a disaster and even Bloodborne for all its success gets a lot of criticism and that’s to say nothing of third-party disasters like Assassin’s Creed: Unity or Street Fighter 5 faceplanting the pavement. Meanwhile, I named a two-dimensional souls-like metroidvania game called Salt & Sanctuary my favourite game of 2016. And I’ll sing that games praises across the hills like Judy Garland if I have to.

Heck, one of the most successful games of the last decade is Minecraft – not exactly a game drenched in its visual or special-effects splendour, is it? And I can’t imagine Minecraft at 60 frames a second and 4K is going to radically change and/or alter that game in any meaningful way.

What the Scorpio is, or what it sounds like, is the kind of hardware we should have gotten a couple of years ago. Argue away if Gen-8 arrived too early, but the truth underlying it all is the hardware we’re seeing now should have been where we began, not where we ended up, and as such the Scorpio arrives in a position where Microsoft has almost bugger all to offer in terms of games, and that’s if you consider XBox One stuff getting upscaled. This could and probably will change, but to make the same mistake as the XBox One launch, focusing on the hardware before you’ve so much as deigned to nail down some actual games… well… once is a misfortune twice looks like carelessness.

Where Gen-8 goes from here is anyone’s guess, and heck knows we need competition. But a console from a branch already struggling on a games front, with talk of a $700 price point (Seriously, Microsoft?) and the need for an additional $350-$500 spend on even the most basic of 40-inch 4K televisions? This just smacks of a massive disconnect with the wider market. Sales are down chaps! In seven years, the Wii, 360 and PS3 managed to nail down a staggering 270 million sales altogether. The Wii U, PS4 and XBox One barely push 90 million, a third of the total after four long and drawn-out years. And with trends as they are, the additional 180 million is unlikely to be found by further shrinking your audience.

The market isn’t coming to you. Truth hurts, wear a cup!

That’s where Nintendo is at least looking like it has learnt a thing or two the last few years. The Switch message was clear, concise and they have been advertising it well (mostly because they can advertise it this time around!). 4K is nice and all but unless you’re on a 4K screen, I question if we’re going to actually see the graphical upgrade in advertising. It’s why the PSVR is underperforming in the way the Wii U did – people aren’t going out of their way to just look at your shit, games industry. You have to go to them – hell, even though Nintendo can advertise the Switch, they did a tour of the thing across the US and Europe to get it into peoples hands!

The only way to reach out is to offer games that people care about. With dwindling sales figures for Halo 5 and some pretty major disappointments in its roster, the XBox One is bereft right now of any real killer hooks in both a mass-market sense and in terms of core gamers. Without games, what the XBox Scorpio becomes is an UHD Blu-Ray player at a time when most of us have gone to full-on streaming and you don’t need me to point out the sky-splitting irony of repeating the same mistake Sony tripped over the the PlayStation 3, do you?

If Scorpio wants to really excel with a niche of very choosy gamers, then it’s got to be down with the games and be damned choosy with those to boot. Unless it has games, the Scorpio becomes all claw and no sting.

Show us some damned games!