There’s been some talk this week about cross-network play.

Many facets of the debate have been raging since it turns out Sony does not want to share cross-network functions with Microsoft or Nintendo, allegedly “to protect the children” – yeah, grasp that one now Nintendo is on board ’cause I sure can’t. Of course, there are probably very good (readas: better) reasons for Sony’s reluctance to concede to cross-network multiplayer; PSN is an ageing pile of hot garbage, after all, and still gets hacked and DOS’ed more than should ever be acceptable (three hacks last year, a dozen outages, and a hack already this year – what was that about protecting the kids again Mr. Sony?). Odds are good it’s just too old and decrepit and non-secure for modern cross-network functionality.

Also, Sony has the lead and it doesn’t want to give you an argument to not buy a PS4, right? Right?

To explain why that point sticks in my craw, we’re going to use some lovely diagrams. I know, I got all artsy on us again, it’s awesome! This is the current state of “cross-network play”

PC Users can absorb from the consoles, but the console players cannot connect to each other, meaning the advantage for current cross-network play has remained an advantage exclusively for PC gamers. They can pool from any source – which means they have a wider net for matchmaking, and the only restriction generally is you won’t see an XBox One user and a PS4 user in the same match. Consoles make up figures. That’s all they do. It limits console players often to their own platform and a specific shard of PC servers which are allowed to synchronise with their platform.

The advantages are immediately obvious; for a start, games like For Honor would be able to cast a much wider matchmaking net – which expedites connection to matches and online gaming sessions, and making that faster means more people get to play and less people are annoyed at having to wait around. For Honor lost almost 90% of its audience since release, and the main reason for this is as people began to fall away, the longer it took to find matches against players. Which turns more people off, which means it takes even longer which leads to more people leaving and yes, that’s what we like to call a death spiral.

Cross-network won’t immediately remedy things for a game like For Honor – indeed, it may be little more than a band-aid at this point for that game. But at least it’s some attempt to staunch the bleeding of users.

Microsoft, Nintendo and as it turns out Valve have come to an agreement for cross-network play that seems to work for all parties concerned. This consolidates all those users into one single pool of users that can connect to each other – but Sony doesn’t want to do this, so now you have a situation that looks something like this; 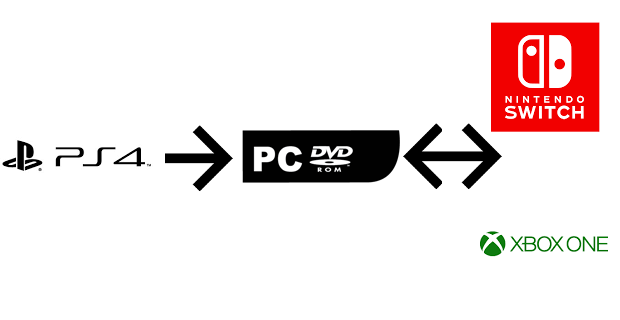 This means a larger pool of players for games on both the Switch and the XBox One – but Sony has to make do with its separate one-way street.

Now, sure, Sony has the larger audience right now so short-term this might not seem like a bad thing; except consider the implications for a moment. Let’s make up a game for this example called… NimeCraft, for no particular reason (I know, I’m lame). You are pushing a big update for your game; but now you have a problem. You have a large audience on one side which is walled off from the rest of the community – and the other side which has multiple devices and machines working together and connecting to each other. You are working on this update but let’s say that one side is more active than the other, namely the cross-network side because there are more connections happening. Which do you push your patch on first – the PS4, the walled garden, or the crowd of players on the cross-network side of things that looks far more active in comparison?

And THAT is the problem.

Sony is kind of in the right to want to keep its users to itself; why give your competition any ground? Except, this is a no-win situation for Sony – if they don’t concede, the developers of NimeCraft (oh god why am I still using this joke?) could easily push the content to the other crowd first, meaning that you have gifted your competition an advantage straight away. They get access to all the fun new stuff first and you have to wait.

Of course, if Sony does concede, then it rightly loses the sales numbers advantage which is effectively, for the most part, the only real weapon they have in their arsenal right now. I mean, I saw their E3 conference. It was 2016 Redux. Nothing new save one new remaster of Shadow of the Colossus. Sony’s E3 showing demonstrated they… they really don’t have much right now except their sales advantage.

After a while, things will come to a head. Do you continue to try and work around the limitations of a stubborn company that won’t bring themselves up to speed with something that could and would be beneficial to both gamers (faster matchmaking) and developers (more players out of the gate which could keep people playing) – or do you just start to ignore the platform, realising that this archaic stance is stupid and your time and effort and indeed, money could be better spent growing other platforms which are much more in tune with consumer feeling. Hmm… I wonder why this feels so familiar…

It’s not a good place Sony finds itself in, that’s for sure.

Admittedly, Microsoft did pull a blinder with the purchase of Mojang and Minecraft. What’s worse for Sony is going in, it seemed Microsoft was frankly doomed in the console space and the XBox One X was going to be the last straw, and then Jim Ryan – Sony’s head of Marketing for PlayStation (doing a good job there, mate!) – began talking. Sony, friendly word of advice. Gaffer tape. It works, is all I’m saying.

Suddenly, Sony looks… really old-fashioned again. And that’s perhaps the real jewel in this whole cross-network push; Microsoft probably doesn’t have much to fear from the Nintendo Switch, indeed it looks like Microsoft is quite happy to give Nintendo a leg-up, but Sony’s reluctance to play ball with cross-network puts it at an immediate disadvantage. If your friends have a Switch, after all, you can play with them via tablet, or PC, or XBox One. You can’t play with them via the PS4. Guess which console gets immediately crossed off the list?

Microsoft let Sony score itself an own-goal here. It’s quite devious when you think about it.

But in most ways it matters, the real winner in this is not the hardware manufacturers – it’s the developers and the gamers who win out. Multiplayer games have larger audiences, which encourages developers to embrace all the machines available which means they probably would end up with higher sales figures as a result. As a result from a consumer standpoint, it won’t matter which platform you support in the end – you’ll get the games, and those games will be supported and maintained and you’ll be able to just dive into a game and not worry if your console has a big market or not because everyone is playing together on a unified server network.

The loser always ends up the console that prefers to gate itself off; last generation, that was arguably Nintendo and they got the message. Now it’s Minecraft, and Rocket League and chances are good there are a boatload of indie games that will gleefully embrace the Switch (particularly the mid-range indie developers). Now Sony wants to gate their platform off from the rest of the world. Wonder how that’s going to work out for them…

However, I do think Sony will be pressured to change its mind.

Not just from the third-party sphere; though the likes of ActiVision, pushing a new Call of Duty on all platforms, will certainly have considerable power and weight behind them if they choose to put the screws on Sony’s current stance. The indie scene will find itself having to ask far more critical questions of Sony; why should we release exclusively on your system, or lock ourselves to you for months, when you have no interest in our multiplayer being that successful in the long-term? Why would we put the effort in to wall you off, when we can simply ignore you completely? Sure, we might have a small hit in sales – maybe – but we get a larger audience pool to play with. And new friendships forged. And the Switch is so much easier to work with.

In the face of this, Sony would buckle very easily. To risk upsetting such a large swathe of developers – particularly indie developers – is a fools errand and commercial suicide.

Of course, this assumes that PSN can be changed.

Truth is – I’m not sure it can be. I think PSN is old, tired and Sony needs to make a whole new network system for the PS5 (which we know they’ve got in the works). It’s clearly still volatile and unsecure in spots, and whilst there’s no foolproof security in existence right now – several experiences with games online functions dying for weeks and months at a time suggest that there is still a lot about the current state of PSN that remains far too complicated. The storefront remains largely the same as it was back in the early days of the PS3 – even Nintendo has been through more interface revamps than Sony (and I’d argue Sony needs it more than Nintendo). Not to say PSN is the absolute worst – hey Origin – but I’m of the mind that Sony would be wise to consider a complete overhaul.

If PSN can’t be modified for proper cross-network play on the PS4 (and it probably can’t), then admit it and move on. You can come back with the PS5 reveal, say we fixed it with the new system and we’ll all be “bravo Sony, well done.” Because ultimately, the winners of cross-network play will be developers and gamers. Sure, there’ll always be some exclusives – I don’t suppose I’ll be playing Bloodborne on my Switch this side of Hell experiencing a chilly patch – but on the whole, most developers will enjoy a larger spread of users, and gamers will enjoy faster online multiplayer matchmaking. It’s good for us, good for the market…

… heck, who knows? It might even get the manufacturers to sort out their own online networking a bit…

VR and 4K Got Shown Up By A Rabbid.

So, (Last) Thoughts on Crossplay.