There’ll be a lot of articles over the Internet welcoming Nintendo back to the fold after a barnstorming first year.

Indeed, there’s much for Nintendo to celebrate with the Switch; two of the highest-rated video games ever in The Legend of Zelda: Breath of the Wild and Super Mario Odyssey. Glorious crossover content like Fire Emblem Warriors and Mario + Rabbids: Kingdom Battle. Bethesda on board, with Skyrim and DOOM 2016 not only running on the Switch but running really, really well. And recent numbers claim 17 million sales worldwide – a staggering figure when you consider how rough the 3DS’s launch was and how big a disaster the Wii U ended up being.

And now, Dark Souls Remastered is not only coming to the Switch, but decided to reveal on a Nintendo Direct in January, the lead-in platform.

I’ve spoken before about the complicated and convoluted reasons and forces that have been working behind the scenes, edging to making the Switch a viable platform for the current market situation. But in reality, there’s a much simpler reason to why this console is doing so well – it’s that it’s a hardware concept that not only makes sense, but in the current state of the technological market really works.

The idea of a “hybrid” console isn’t new – the PS Vita was, for a brief moment, positioned in such a way. The problem was simply that the device in question couldn’t quite cut the mustard – be it the hardware under the hood, the small screen or the general expense of the memory sticks, the Vita got caught in a dark place between the handheld-focused 3DS and home consoles pushing 1080p. It wasn’t cheap enough, nor advanced enough, failing to find a workable compromise between the two extremes. For all the Vita’s faults and foibles, the sad and painful truth of the matter is that it was a non-starter from the word go, and most of us knew it.

The Switch, however, finds that middle-ground. The battery is just good enough. The hardware is capable of running modern games – yes, in some cases scaled down to 720p or even 640p, but it can run them and run them well – DOOM says hi on that front. It uses basic MicroSD cards, an affordable memory medium. And there’s no ifs, ands or buts about it – the games you play on your television are the exact same ones you can play on the go. Just slip it out of the dock and boom, everything just works. No complicated menus or syncing or anything silly like that. It just works.

On that front, nVidia and Nintendo performed a brilliant job; nVidia’s mobile hardware is certainly showcasing what it can do, and with reports that even Final Fantasy XV is on the horizon… even I don’t know how that’s going to work. Sorcery may be the only explanation. And Nintendo’s software muscle has built a brilliant concept, where the only difference between handheld and home console is whether it is in the dock or not, and the ‘switch’ between the two is near as makes no difference instantaneous. Both companies have come together to showcase what a real “hybrid console” can look like after years of doubt and faltering steps – and it’s quite something.

But that’s not the point.

People are shocked that this isn’t an issue to so many people – even though the console market has repeatedly proven time and time again power is never the deciding factor. No, the Switch ports may not be as glossy or high-resolution as their more full-fat home console counterparts. But what people are losing in graphical fidelity, they’re getting back in portability. Skyrim on a plane. Bayonetta on a train. Dark Souls – Prepare To Die… On The Toilet. Breath of the Wild… in the actual wild. The games you are playing at home… and now, on the go, anywhere you fancy.

It’s a ridiculously simple conceit but it must be said, it’s only in recent years that mobile hardware has come close to the potential power of a dedicated home console. Some people have gutted the Switch and found that in reality, it’s insides are positively tiny. Compared to what the inside of your PC or PS4 looks like, it’s not far off at a fraction of the size and that, as many have said, is likely to lead to a new mobile hardware arms race. Being this close to overtaking traditional gaming hardware… a few more years, another console generation, and it could very well be the de-facto port of call for any new games console. 4K gaming in a device the size of an Ouya, for example.

The October 2016 reveal was, for me, perfection. No words, no long lectures, it was simple and to the point. The guy at home, right at the start, playing Zelda. And then the dog needs walkies – but no big deal, slip the Switch out of its dock, boom. Still playing Zelda. In the middle of the park. Which was unrealistic if only because the dog was off its leash in a public park and that’s just not the done thing. In a minute, Nintendo had laid down everything you needed to know about the Switch.

For me, this is why the Switch has had such a great year. People can -see- the trick. And they like it.

People will be prepared to take a hit on resolution just for the flexibility that portability offers. There are thousands – nay, millions – of stories online of people who have rediscovered gaming, or just found pleasure in the simple act of squeezing in an additional hour or two on their commute, in their lunch breaks and so on. The convenience of this single principle is a trump card that nothing else can match right now.

And where there is success – there is support. FROM Software could have dropped its Dark Souls Remastered announcement with the PS4 leading – hell, the PlayStation arguably birthed the Soulsborne sub-genre with Demon’s Souls and Bloodborne. No-one would have batted an eyelash at the PS4 being the lead platform. But it wasn’t – that honour went to the Nintendo Switch. Quite a feat and no doubt a small but not insignificant slap in the face to Sony (come on, it was and is). Talk is Diablo 3 is coming to the Switch, in a tease Blizzard are trying hard to play down. Final Fantasy XV – Gamestop is already saying that’s on the horizon and I wouldn’t be shocked. Even EA has had to eat a massive unsweetened helping of Humble Pie, as FIFA 18 on Switch has proven to have a very strong and consistent sales curve. Activision is already hinting Call of Duty is coming to the Switch (in this weeks “Bears Do It In The Woods” Award For Most Obvious Thing Of 2018) and there’s Wolfenstein II: The New Colossus getting boxart and preparing to launch.

People may say, “But the Switch can’t run these games as well as my PS4/XBox One”. And they’re right, of course. But if a developer can port it, or the studios exist that specialise in these ports – and Panic Button’s rapid expansion and more studios coming up through the cracks tell us that there’s a high demand for this – then of course they will. It’s no longer about “but it won’t look as good…” – we know. But the point has missed you by a mile; I’m playing Xenoblade Chronicles 2 in hospital waiting rooms. I’m playing Fire Emblem Warriors quietly in the corner as remnants of my family bicker and argue around me. I’m playing these games… anywhere. Anytime. And so are  a reported 17+ million other people right now.

Yes, the Switch’s second year will be a big deal – the Online Network subscription drops later this year. Pokémon Switch is being touted as a Holiday 2018 release. And there are plenty of spanners others can throw in the works – Sony has a few big plays this year, whereas 2017 Nintendo was largely left to take over unchallenged. And who knows, maybe the XBox One X will have a good year. Unlikely, but then, people said Nintendo was dead and buried…

But one thing is certain; the Switch is another very pertinent lesson that you never, ever count Nintendo out. They’re capable of reinvention on an unprecedented scale. And now, they seem to have the full support of third party publishers and a boatload of indie developers to boot. Right now, it seems Nintendo is in the strongest position its been in for years – heck, with the amount of support it is getting from developers and publishers, I’d even argue it’s not been this strong for Nintendo since the Super Nintendo era. I said it.

And if you’re still counting Nintendo out… well, you’re clearly not paying attention. 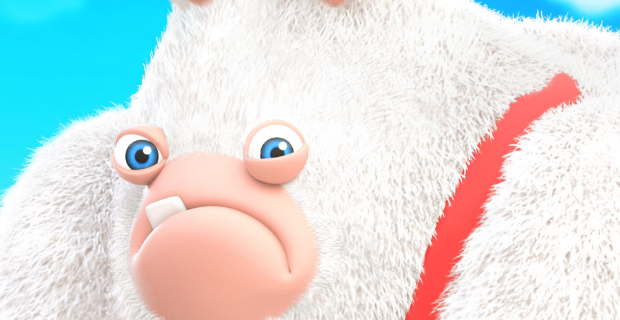 VR and 4K Got Shown Up By A Rabbid.